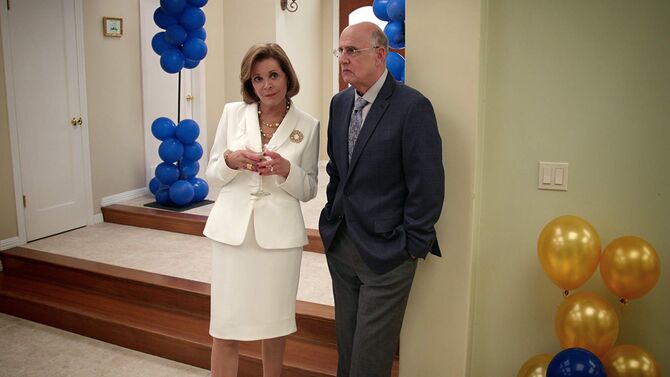 After the July 2nd parade, many Bluths and Funkes gather at the model home for a Welcome Home From Jail party for Buster. Lucille and George discuss the fact that Sally Sitwell has won the election and supports the border wall. They need to pay back the Chinese investors the money and get out of the border wall. Meanwhile George Michael and Maeby discuss being $2 million in debt at Fakeblock. Rebel wants to invest in the company, but George Michael doesn't want to do that to his girlfriend. Maeby says he should just shut off his feelings for her, like she has learned to shut off her feelings for her parents and everyone else. George Michael calls her a sociopath while Maeby points out that he's the one still lying about his name and his company to Rebel.

Meanwhile, Tobias and Gob watch TV news about the parade in the living room. Gob hopes that Tony Wonder somehow survived the closet illusion, and worries that the Alliance will be mad at him if he says he's not gay, that it was all a trick. On TV, George Michael and Maeby see Gob's illusion with the paid protesters, and he wonders if he can scare Rebel away from Fakeblock with paid protesters. Maeby tells him about the Anonymous hackers who wear Guy Fawkes masks, and he finally figures out that the Anonymous note he received on Cinco was from them. They have been threatening him online for months. George Michael asks Gob if he can get paid protesters in Guy Fawkes masks for Fakeblock, and he agrees to help.

Finally Michael arrives and Lucille asks why he didn't bring Buster home. On TV, they all see Buster escaping with Oscar at the parade, and we learn that Oscar found out about Buster being in jail when Barry talked to him in Mexico. Lucille worries about Buster and George worries that Lucille 2 is really dead. Tobias pretends that he lost Murphybrown and Debrie at the parade, but actually they are hiding in the model home attic.

George tells Michael that the Bluth Company absorbed Sudden Valley when they forgot the debt, and that Michael is now co-president with Gob. He tells Michael to go through the books and look for money for the company. Buster and Oscar are still on the run, with their legs chained to each other and they leave the fake Vote for Sitwell staircar. Buster breaks his fake hand and they go to a Mother of God hospital to get a replacement.

In the garage, George tries to kill himself again, but Michael points out that the Prismo is an electric car and won't kill him with carbon monoxide. George complains about Lucille dating the lawyer/beach rat Dustin Radler. George decides to go find Buster to win Lucille back. Meanwhile Michael evaluates the Bluth Company finances while Adhir gives Gob treats like a dog trainer. Gob bought a 3D dental printer from the Two Hour Dental office that was on that floor, and Michael discovers shady dealings in the Bluth company. Adhir leaves and Gob quits, miscontruing a conversation with Adhir on his way out that leads to his decision to get Christian gay conversion therapy.

Buster and Oscar run into Stan Sitwell at the hospital and take him hostage, going to his condo at the retirement community. George Michael brings Rebel to Fakeblock, but the paid protesters are hot guys wearing fox masks, and Rebel thinks it's a joke. There are employees inside the office, like a typical tech company, and George Michael is surprised. At the beach cottage, George and Lucille argue about Dustin Radler and he leaves, trying to prove that he's fun and alive by renting a Zorb ball at the beach. Meanwhile Gob announces on TV that he's going into Christian gay conversion therapy.