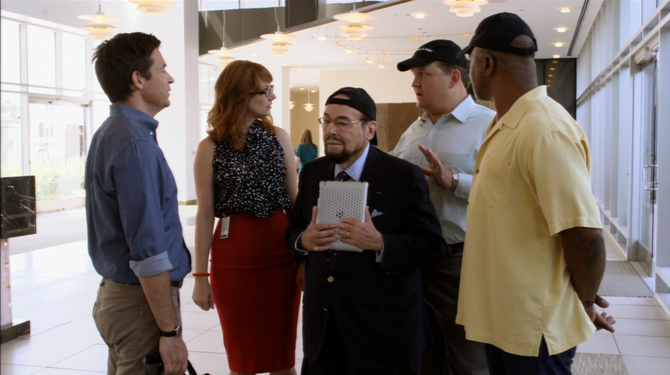 The Untitled Michael B. Project is the working title of the movie produced by Ron Howard and Brian Grazer of Imagine Entertainment originally about the California real estate market collapse told through the personal story of Michael Bluth, but since then, the project has evolved into something completely different.

The very first time Ron Howard crossed paths with the Bluths was after Maeby was found out to be underage while working for Tantamount Studios.Mort Meyers suggested she could get the rights to her and her family's story by making her family sign releases. Whether she got the rights is unclear but improbable, because soon after she started collecting signatures, Michael left the party looking for the absent George Michael, and Lucille capsized the boat while fleeing from the SEC. ("Development Arrested") Nevertheless, Maeby eventually got a meeting with Ron Howard, who appeared to be interested by the project (although he saw the story about the Bluths more as a movie, rather than a TV show) and hired Maeby to work for Imagine Entertainment. But her stint as a legitimate movie producer ended when a new hire and old enemy Kitty Sanchez got her fired and the project was put on hold. ("Señoritis")

The Untitled Michael B. Project

Ron Howard was reminded of the Bluths and got the idea to use Michael as the central figure this time after seeing his article in an issue of Altitude. He wanted to make it a father-son story and show the heartache of Michael's wife's death. Michael assumed the father-son story was that of him and his father, but Ron wanted to tell the story of him and George Michael. ("The B. Team")

Michael needed to get the rights to his family so he approached Carl Weathers to buy the rights he had for Scandalmakers, but Carl never acquired them. He then was cast to portray himself in the film. Michael hired Stefan Gentles to be the screenwriter and Andy Richter to portray his father. Ron and Brian ended up nixing Michael's creative team, advising him to focus on getting his family's signatures first and foremost.("The B. Team")

Michael proceeded to get everyone's signature but, angered by his family, ended up ripping most of them up. He never asked for or got George Michael's signature and in the end only Buster's signature remained intact.

Not all signed releases were ripped up on screen, in some cases Michael simply told a family member they were out of the movie. Two family members didn't sign one at all.

After Buster, whose only intact release got into their hands, got arrested as a suspect for the murder of Lucille Austero, Brian Grazer and Ron Howard proceeded to celebrate, as the murder mystery story could potentially be "the next Da Vinci Code." ("Blockheads")

After Ron and Michael signed a new contract, the project was retooled into a series called Making a Monster. ("Emotional Baggage")

Retrieved from "https://arresteddevelopment.fandom.com/wiki/Untitled_Michael_B._Project?oldid=53941"
Community content is available under CC-BY-SA unless otherwise noted.