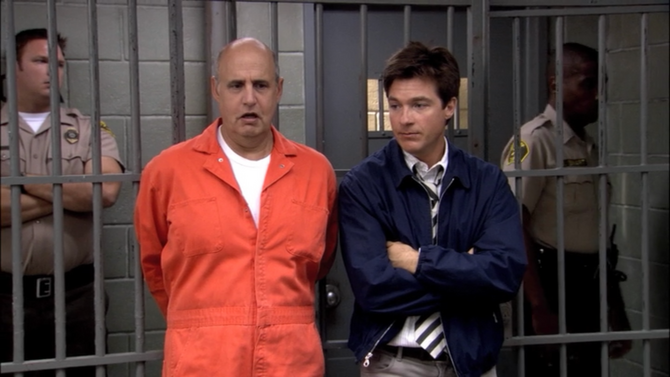 "Visiting Ours" is the sixth episode of Arrested Development's first season.

Michael sets up an "intimate conjugal visit" for his parents, while it is revealed that George Sr. had an affair with Kitty, his secretary who recently slept with G.O.B.. Tobias and Lindsay see a marriage counselor.

Michael visits his father at prison, but George is too preoccupied with a softball game to tell him the location of some international files. Michael leaves and vows to never return and instead asks Kitty about the whereabouts of the files. She is cagey with her answers as well, but shows an obvious attraction to a repulsed G.O.B.. Michael bribes G.O.B. to flirt with Kitty to get the information. He reluctantly takes her into the copy room of the Bluth Company office and they have sex.

Michael drives to Balboa Towers and awkwardly asks his mother to visit his father in a conjugal trailer. She agrees to do it if Michael agrees to upgrade her country club membership. At the trailers, George has secretly arranged for Kitty to meet him in a trailer the same time that Michael has arranged for Lucille to arrive. Michael agrees to hide his father's infidelity from Lucille if George gives up the location of the international files. G.O.B. leaves the prison after delivering a "strongly lettered word" to Warden James Buck and Michael asks him to stall Kitty while George and Lucille have their conjugal visit. G.O.B. agrees but is so repulsed by Kitty that he sneaks out the window. Warden Buck finds him and detains him against the window of his parent's trailer.

In front of the model home, George Michael expresses his worries about prison. Michael comforts him, telling him that his grandfather is very guilty and belongs in prison.

Tobias and Lindsay see couples therapist Phil Gunty to try and work out some of their marital problems, namely Tobias' Never Nude affliction. Maeby trails them and is frightened by the thought of her parents divorcing. In the therapy session Tobias and Dr. Gunty participate in role playing while Lindsay sits and reads DogCandy.

Retrieved from "https://arresteddevelopment.fandom.com/wiki/Visiting_Ours?oldid=54799"
Community content is available under CC-BY-SA unless otherwise noted.