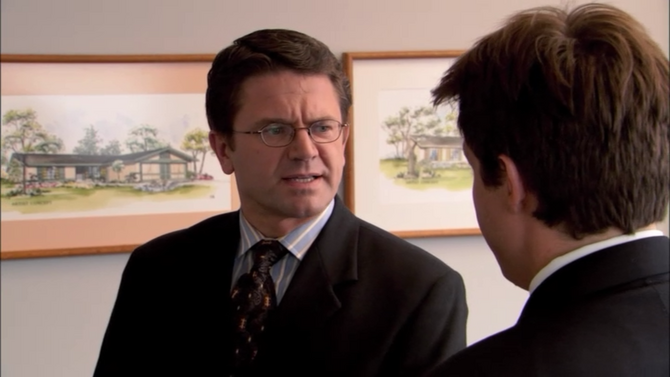 Wayne Jarvis is a no-nonsense lawyer. If he could use one adjective to describe himself, it would be "professional." He is originally hired to represent the Bluth family but later, thanks to the Patriot Act, acts as prosecutor against George Bluth.

Wayne was initially hired by the Bluth family, namely Michael, to replace Barry Zuckerkorn to get George out of prison. When Michael and Lindsay believed their mother Lucille was on a date with Barry they paid $10,000 for George to participate in the Living Classics Pageant to catch them on a date. However, Lucille ended up being on a date with Wayne. He hid behind a trash bin so George would not see him. ("In God We Trust")

Wayne eventually becomes a prosecutor of the family, who often invokes the USA PATRIOT Act. Wayne and Cho questioned G.O.B. for information but realized he knew absolutely nothing. They then offered Michael immunity if he turned in his father. Michael refused and Wayne showed everyone present a photo found on Bluth Company servers of Iraqi mountains with likely storage caches of WMDs. When Barry saw the photos he realized they are a close up shot of testicles, not WMDs. ("Sad Sack")

When Michael signed an affidavit stating that he had no idea where his father had been Wayne Jarvis and Cho had him arrested due to photographic evidence of Michael and George together. The "evidence" was a photograph taken from a red light camera, actually of G.O.B. driving holding up a picture of Michael. Wayne offered to free Michael if he turned in his father. Ultimately Oscar was incarcerated (assumed to be George) so Michael was let go. ("Righteous Brothers")

While preparing for Mock Trial with J. Reinhold, Michael and Franklin were approached by Wayne Jarvis who joined them in the stair car. Wayne threatened Michael that if he didn’t get his father on the stand, the government was going after N. Bluth, whom they suspected was Michael. G.O.B. played the recorded conversation from a tape recorder inside Franklin on the stand during the filming of Mock Trial, causing the case to be thrown out due to mistrial. ("Fakin' It")

Tobias met with Wayne Jarvis, thinking it was an audition for a CBS crime procedural The Prosecution. After being shut down on his audition, Tobias refused to help their case. Wayne then called Michael in and questioned him about Bluth family members dodging the trial. His dramatic timing was ruined by the television. ("Exit Strategy")

Wayne Jarvis: I shall duck behind that couch.

From "In God We Trust"

Michael: I’m sorry, I don’t understand how this is not a conflict of interest. I mean, you almost represented us, and now you’re the prosecutor?

Michael: Are you serious?

Wayne Jarvis: Almost always. I was once called the worst audience participant Cirque du Soleil ever had.

Michael: This is a big accusation.

Wayne Jarvis: Well, Michael, I did not find their buffoonery amusing.

Wayne Jarvis: Read the Patriot Act: “Anything said in a mock trial or daytime courtroom show can be used in any real criminal proceeding, or prime-time procedural show, subject to the interpretation of the presiding judge, or the executive producer.”