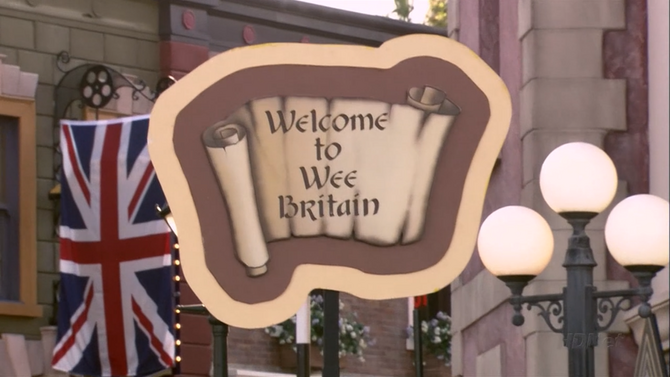 Wee Britain is the British themed area of Orange County, where Rita Leeds and Uncle Trevor reside, covering roughly one street. The property is currently owned by Rita Leeds, who inherited from her parents (who were cousins).

Exteriors for Wee Britain appear to have been shot at Universal Studios, Holllywood.

Michael visits Wee Britain to investigate his father's claims that he was set up by a British syndicate to build houses for Saddam Hussein. While attempting to retrieve files from the British Business Bureau, Michael met the lovely Rita and was instantly attracted to her. While asking her on a date, he was struck by Merry Poppuns. ("For British Eyes Only")

Rita and Michael met for a date at Fat Ammy's, the American style restaurant inside Wee Britain. Michael lied and told her he had no family as an attempt to protect their relationship from the inevitable insanity the Bluth family would cause. Outside, he is again hit by the Merry Poppuns. Later, after meeting the Bluths, Michael came clean to her about his family's legal troubles at Fat Ammy's. ("Forget-Me-Now")

Rita and Trevor discussed Rita's involvement with Michael at their apartment in Wee Britain. ("Mr. F") Later, after Trevor realized Michael won't recognize Rita to be an MRF, he forbids her from marrying him and locks her in the apartment. Michael comes and rescues her, but he is hit for a third time by the Poppuns. ("The Ocean Walker")

Apart from simply containing British-themed attractions, it has other British quirks: