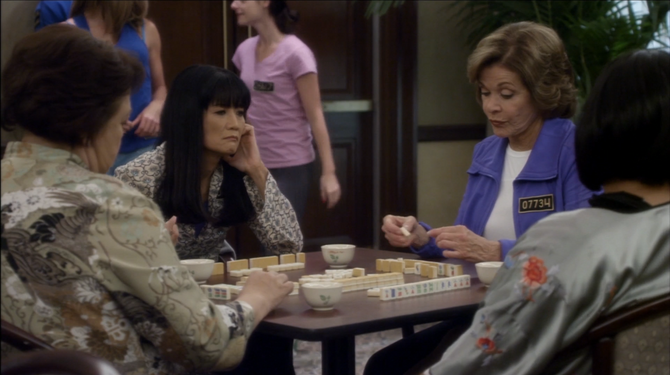 "What Goes Around" was the fourteenth episode of chronological re-cut of Arrested Development's fourth season. It premiered on Netflix on May 4, 2018.

At Orange County Correctional Facility L.I.T.E., Lucille has joined a prison gang called the Jade Dragon Triad. However, she is starting to annoy the other gang members. George Sr. suggested that she join them years earlier although not before telling her that she can get a reduced sentence if she goes to Lucille 2's rehab. She initially impresses the gang by showing them how to smoke inside. Olive Garden offers to pay off the debt on the land although this means the Chinese will own the border wall. Lucille doesn't care though because the government will still pay the Bluths for the land.

George Sr. is devastated by this news because he has found out that the land is in Mexico and not the USA. He tries to get Herbert Love to stop supporting the wall but doesn't have the money to do so. George Sr. asks Michael to convince Herbert Love to speak against the wall at Cinco de Cuatro.

After getting mistaken for a predator by John Beard, Tobias ends up in prison but is released as long as he works at Austerity. Tobias is now working at the rehab center as a therapist and his patients include Mark Cherry and DeBrie Bardeaux. Argyle Austero, Lucille 2's brother, realises that Tobias and DeBrie already know each other and bans Tobias from being her therapist. Tobias convinces him to make a Fantastic Four musical with the patients so he can still see DeBrie as a producer.

Tensions rise in prison and Lucille is almost stabbed by a member of the gang. Afterwards, George Sr. admits to Lucille that they bought the wrong land. She changes their plan so that Herbert Love should speak against the wall but after they build enough for the government pay them for the land. George also tells her that he fired G.O.B. after he ruined the sweat lodge business. Lucille says to give him another job and also to produce evidence of the wall being built. To do this, George Sr. has a wall built and he drives around it with Buster while filming. However, it becomes clear that it's a circular wall and isn't miles long when Buster must leave the truck because he feels travel sick.

Michael arrives at the Ealing Club to see Rebel Alley's band but first, outside the club, he meets Ron Howard. Here, Michael finds out that when Ron said he wanted a film about a Bluth father-son relationship, he meant Michael and George Michael, not George Sr. and Michael. Michael is unsure whether he can ask his son for his signature. Ron Howard leaves and Rebel Alley arrives, although Michael still doesn't know her name. He watches her band and then have a drink together. Michael offers her a part in his movie and she tells him about the trouble she's having with her son Lem. He sympathizes with her although it turns out her son is six and isn't an adult like George Michael. Afterwards, Michael and Rebel go into a photo booth before they part ways. When looking at the photos, he realises that she is Rebel Alley.

On the next Arrested Development: Fateful Consequences... Tobias convinces DeBrie to join his musical.

Retrieved from "https://arresteddevelopment.fandom.com/wiki/What_Goes_Around?oldid=54754"
Community content is available under CC-BY-SA unless otherwise noted.