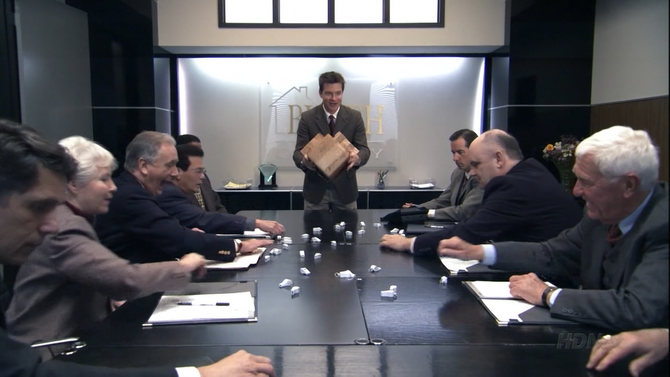 Michael deals with numerous requests for some unfrozen money, and chastises Lucille for being too coddling with Buster. Also, Lindsay decides to protest the war to boost her self-esteem, Tobias and G.O.B. decide to start a coffee company.

Lemon of a deal

When the Bluth Company comes into some available funds, everyone starts asking Michael for favors. Lucille asks for money to pay for Buster's jaw surgery but Michael informs her that Mr. Jordan, a board member, is blackmailing Michael into buying him out of his stock for twice the value, else he'll inform the SEC of Bluth family corruption. At the Bluth Company offices, Michael gives the board a box of whistles so everyone can be a whistle blower and stop corruption. He then has to recollect the whistles because the board members were abusing them.

George calls Michael and asks him to give his twin brother Oscar $10,000. Michael meets with Oscar and finds out he owns a lemon grove, which Michael bypasses the board and buys for $10,000. He finds out from his father that the land is useless because the government has an easement on it. A series of verbal flubs lands Michael in hot water with Mr. Jordan. In a moment of need Michael visits Balboa Towers and asks his mother for help. She hugs him and leaves to take care of business.

Lucille visits Oscar and demands that he give back the money, and happily agrees to rekindle their secret romance. She buys Mr. Jordan off the board and takes place at board meetings.

When Tobias and G.O.B. ask Michael for money at the same time, he suggests they draft a business proposal so they can earn their money. To brainstorm, they meet at North Roast Coffee where they run into Michael. He tells them he's always been tempted to open a coffee shop. Finding themselves in a moment of unexpected success, they leave without saying anything.

Later, they present a binder for Gobias Industries—the name of their coffee company. Michael informs them the money is no longer available to their disappointment. G.O.B. blames George for the lemon grove deal and Michael tries to deflect but doesn't correct the blame.

In true Bluth fashion, Lindsay asks to borrow some money so she can have an affair to boost her self-esteem. Michael tells her to get back to her activist roots, which Lindsay takes as an invitation to see her hair stylist. At the salon she finds out Alex, her hairdresser, has been called to war. Appalled that there is a war happening and that Shawna might have to touch her hair, Lindsay decides to protest the war.

At a free speech zone Lindsay voices her shallow opinions on the war. When some locals hose the protestors down in the cage, Lindsay is the only one who remains and decides to cage dance. The dancing and attention boost her self-esteem.

While working at the banana stand George Michael sees his pop-pop with long hair on the Oceanside Wharf. He tells Maeby who makes fun of him. Later, Maeby sees the same thing. Not knowing that George has a twin brother Oscar, they assume George has escaped from prison. They visit him at prison and are releaved that he hasn't escaped, but accidentally reveal Michael's purchase of Oscar's lemon grove.