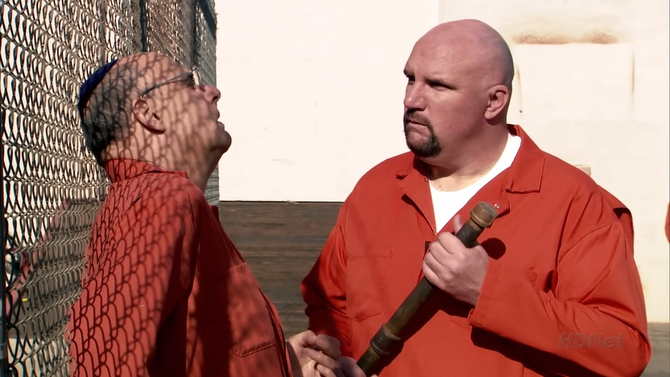 White Power Bill was an inmate at Orange County Prison with George Bluth. He was a hulking, bald white supremacist.

When G.O.B. enters prison as a publicity stunt, he offends White Power Bill by performing a classic magic trick - pulling a coin from behind his ears. The nickname "dirty ears Bill" catches on, so Bill stabs G.O.B. in the courtyard. ("Key Decisions")

When Tobias enters prison to research his role of Frightened Inmate #2, George trades him for a pack of cigarettes to be White Power Bill's bunkmate. ("Staff Infection") Tobias manages to use his psychologist skills on White Power Bill to get to the root of Bill's problems. Bill discovers that he hates not his father but rather himself and commits suicide out of shame. ("Missing Kitty")

Retrieved from "https://arresteddevelopment.fandom.com/wiki/White_Power_Bill?oldid=39764"
Community content is available under CC-BY-SA unless otherwise noted.